USA Today brings you the first look at the brand new W Magazine cover story featuring Madonna photographed by Steven Klein. The new issue will hit the newssstands on Friday, as M-Tribe told its readers the other day. The new cover stroy reads “Madonna Rides Again – The Ultimate Fashion Icon Star in a 58-Page Photo Portfolio by Steven Klein”.

• Who’s that girl?. “Madonna’s multiple personalities collide in the upcoming issue of W Magazine, on stands in New York Friday (nationwide on May 19). The singer’s proper English horsewoman meets the sexy Material Girl and Boy Toy in a 58-page photo spread. The singer, 47, joined six stallions on a Hollywood soundstage for a shoot with photographer Steven Klein, their second collaboration for W. Just eight months ago, Madonna was injured when she was thrown from a horse.

Among the images: a topless Madonna in fishnet stockings, long leather gloves and riding crop; the singer dressed in black, cavorting with a horse on the sand; Madonna pulling a horse’s tail.

Madonna’s Confessions tour kicks off May 21 in Los Angeles.” 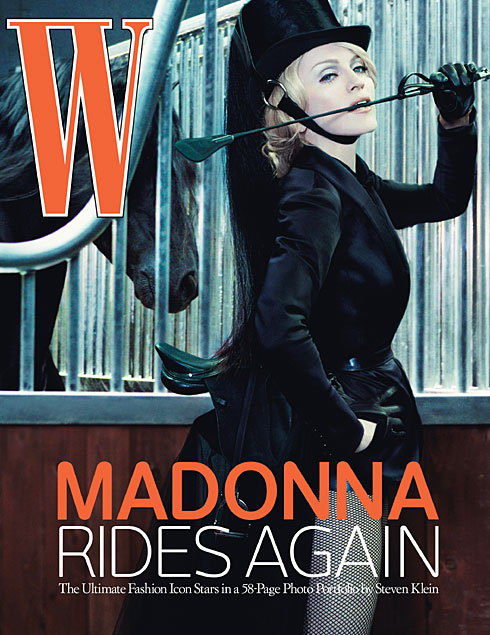 Based on an article by Karen Thomas, USA Today.

Thanks to GIOrGIO, pakitolario, Pedro, and Juanjo y Dani.