Shanghai Surprise, Madonna‘s second major movie produced by ex Beatle, Jorge Harrison, is finally released today on DVD format in the United States. The film, directed by Jim Goddard and co starring Madonna’s then husband, Sean Penn has fuelled a lot of controversy, from the start of shooting to the cinema release which was on August 29 , 1986. Madonna and Sean were referred to as “The poison Penns” by tabloids and paparazzi which claimed the couple hated the media that made them famous. Even during the UK film press conference journalists attacked both Madonna and Harrison with silly jokes. After all the buzz, unfortunately the film proved to be a major flop. After few years, when questioned on the poison Penns, the former-Beatle gave the blunt reply “Don’t ask! We had the wrong script, the wrong director and the wrong stars.”
Based on the novel “Faraday’s Flowers” by Tony Kenrick, and in the tradition of such 80’s classics as “The Golden Child” and “Big Trouble In Little China”, Shanghai Surprise features adventure, humor, mystery. Distribuited by Artisan Entertainment (Fox) , the Us dvd features English 2.0 Surround, 4:3 Pan & Scan and no bonuses at all, for a list price of $14.95.

When asked by a journalist about her then upcoming album (True blue), Madonna calls it with the working title of “Live To Tell”. 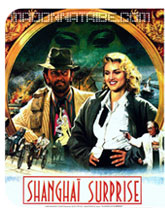 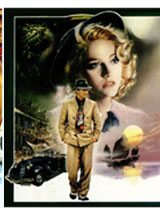 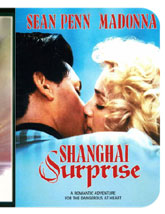